The Society of Information Displays (SID) had their annual major symposium and trade expo (virtually) recently (DisplayWeek).  This conference covers a wide range of display topics with some going deep into the display technology weeds.  Below we summarize some of the highlights related to 8K displays from the exhibit part of the event.  A previous article looked at 8K in the symposium area. Those interested in more details need to register to access the papers. 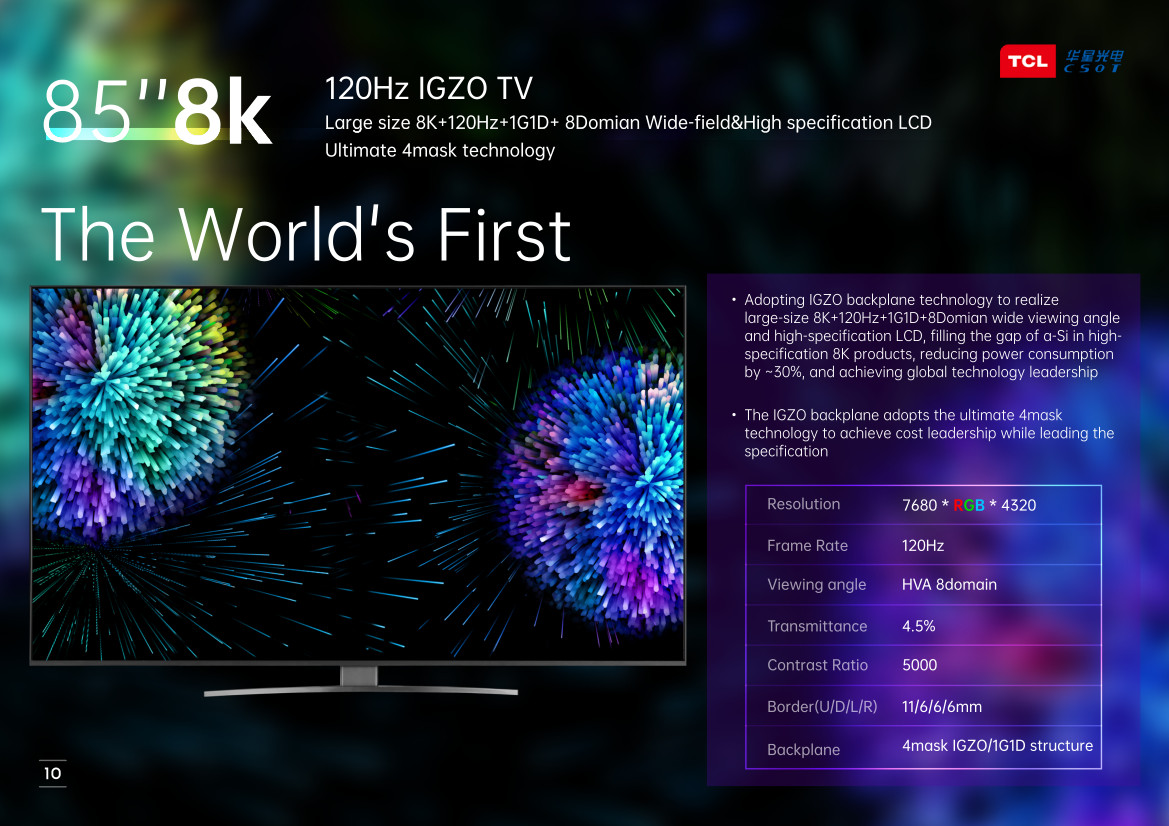 CSOT also highlighted their 75” 120-Hz 8K panel using a miniLED backlight configuration. The company said these miniLEDs are placed on a glass substrate instead of the conventional PCB substrate.  The glass substrate allows for active matrix switching, which will offer higher performance than the passive matrix switching used with PCB versions.  CSOT said there are 5184 miniLED but they did not disclose the number of dimming zones. Luminance is 1000 nits and (dynamic) contrast is 1M:1. Parent company TCL showed a similar technology a couple of years ago called Vidrian, but it was not commercialized.  Perhaps it will be now.

In a view of future technology, CSOT said they have fabricated a 142-inch direct emission LED display composed of 160 11-inch panels.  What is different about this display is that it again uses an active matrix glass backplane, but now fabricated with IGZO technology and miniLEDs.  Resolution was 1920 x 1080 with a pixel pitch of 1.6mm and a 60 Hz frame rate.

Chinese panel maker BOE highlighted their 75-inch 8K display featuring a miniLED backlight with 5184 dimming zones. The miniLEDs are mounted on a glass active matrix substrate – a so-called chip-on-glass (COG) process that includes a black encapsulation step for deeper contrast.  Typical luminance is 500 nits with a peak luminance of 2000 nits. Color gamut is 80% of BT.2020 and the (dynamic) contrast ratio is 1M:1.

BOE also showed what appears to be a direct view miniLED display that uses the same COG technology and active matrix glass backplane. BOE says the advantage of active driving vs. passive is the lack of flicker and a 20% power savings. In their promotional video, they showed a display but did not say what size it was. However, the pixel pitch was stated a 0.937mm; luminance at 1000 nits; contrast at 1M:1 and average power consumption as 120W/m2.

LG Display had a video in their booth that talked about their 88” 8K OLED TV with “cinematic sound”.  This is a technology that attaches transducer to the thin OLED panel to allow the panel to actually vibrate at audible frequencies to create the sound from the video.  In theory, this can allow voices to seem like the emanate from the person’s lips on the screen. LG was talking about their cinematic sound display as early as CES 2021 and it is unclear is how it is different from their crystal sound technology debuted several years ago.