Can ATSC 3.0 Distribute 8K Content? The Answer is Yes

That is precisely the question that was addressed in a presentation by Sung-Ik Park of ETRI at their recent workshop in Korea. The fact is, ATSC 3.0 was not developed with the bandwidth to support 8K, but according to Park, terrestrial over-the-air distribution of 8K is possible using three different approaches.

His talk started with some background on the ATSC 3.0 suite of standards. Key elements include that it is IP-based with video using HEVC or SHVC encoding, including as support for PQ and HLG HDR signals. The physical layer allows for RF over-the-air (OTA) as well as broadband network distribution of content (Over-the-Top or OTT).

Park then described the first way to distribute 8K: channel bonding.  This feature is already standardized in ATSC 3.0 and requires two channels to provide the bandwidth needed for 8K content.  These channels can be widely separated in RF frequency (VHF and UHF, for example) to provide a 110 Mbps capacity.

Such a capability was first shown at NAB Show 2019. A laboratory demonstration of this HEVC-encoded 8K content was showcased at the workshop with a new field trial planned with Korean broadcaster KBS for 2022. The downside of this approach is the need for two ATSC receivers and the processing needed to combine the signals for playback on an 8K TV.

The second method uses the Multiple-Input-Multiple-Output (MIMO) capability of the ATSC 3.0 standard.  Here, the idea is to use a single RF channel but increase the bandwidth to ~110 Mbps by using a two-antenna solution.  Park noted that the ATSC 3.0 standard supports the use of a 2×2 MIMIO option that allows a signal to be transmitted in both a horizontal and vertical cross-polarized configuration.  MIMO precoding steps map the 8K content to the two antennas.

This was also showcased as a field trial and lab demo in 2020 working with KBS.  The downside of this approach is the need for two X-pol MIMO antennas and a special receiver to combine the signals.

The third approach highlights the OTA/OTT option enabled by the common IP transport. Here, the idea is to use a base layer and enhancement layer as outlined in the Scalable HEVC (SHVC) standard.  The base layer contains the 4K signal and this is transmitter over the air as a standard ATSC 3.0 signal.  The enhancement layer, which contains the information to create an 8K image from the 4K base layer, is send over a broadband network to the home where a receiver combines the signals to send to the 8K TV.

This approach has the advantage of providing conventional 4K OTA content to those with 4K TVs while also enabling 8K TV owners to see native 8K content. The minor downside of this approach is the need for both an antenna and a broadband connection and the potential issues with syncing these two signals.

A preliminary lab demonstrated has been facilitated by ETRI to showcase this option in 2020.  In their demo, the base layer 4K content was broadcast at 20 Mbps while the enhancement component was streamed at 40 Mbps to reproduce 8K content at 30 fps.  The layer change delay was 2.43 seconds.  For 2021, ETRI plans to do an 8K 60 fps demo of this technique.

This approach may be the most viable both from an end user’s and a broadcaster’s point of view as this minimizes the equipment and infrastructure upgrades offering an easier path to 8K adoption.  Such a technique has already been pioneered as HbbTV in Europe as well.  Plus, the LCEVC MPEG codec supports a base/enhancement layer approach offering an additional way to provide the base/enhancement layer options that is codec agnostic.

Park’s summary of the pros and cons of each approach is shown in his conclusion slide below. 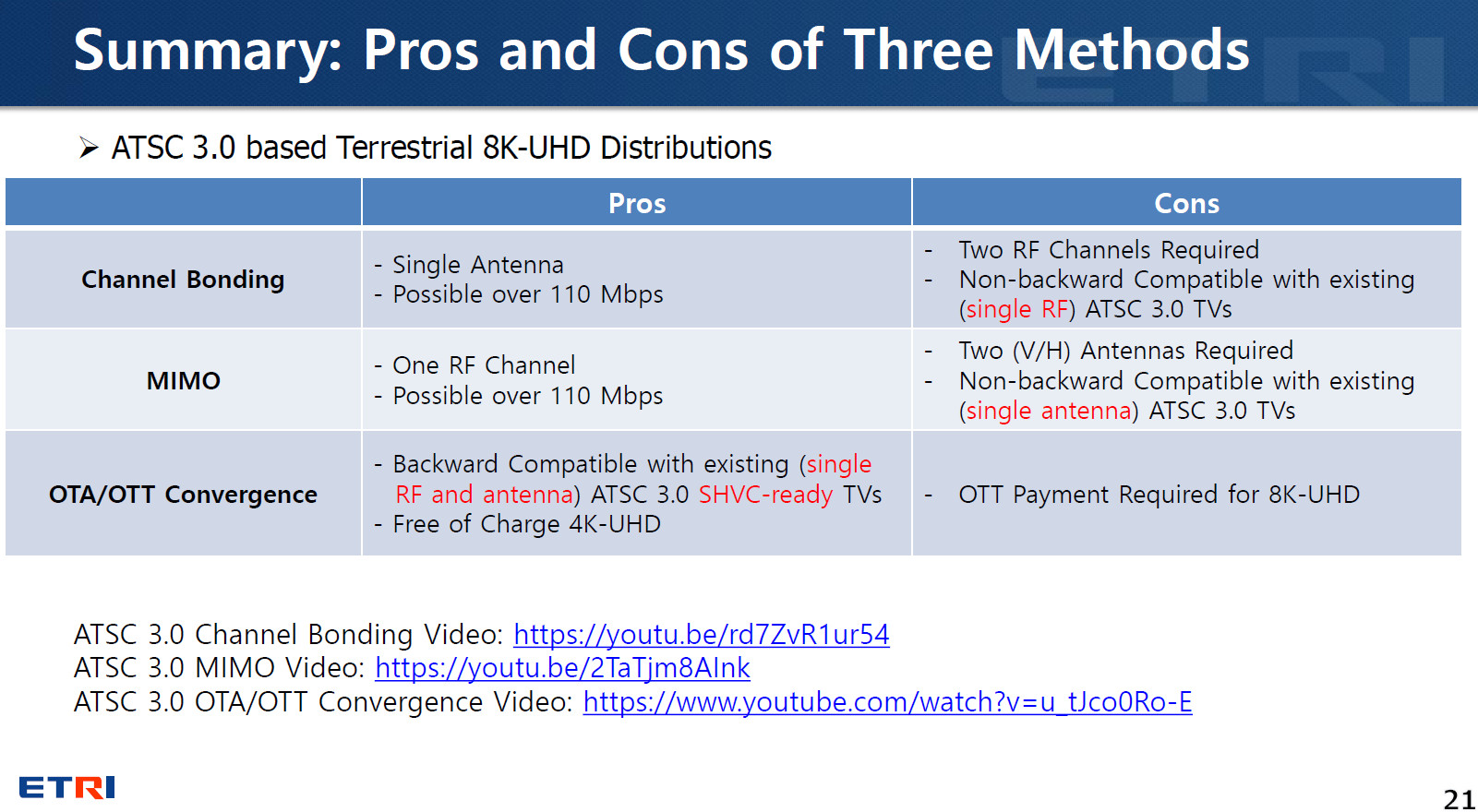